Coach of the year - Bill Becker 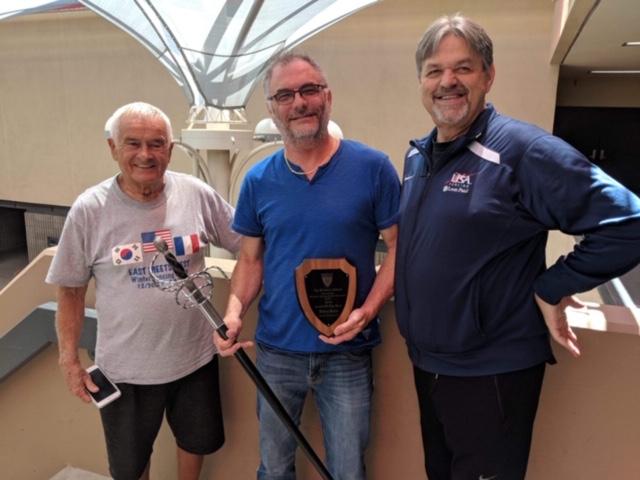 William Becker graduated from Florida International University with a Bachelor of Science in Physical Education and has a Master's of Arts degree in Physical Education from the University of South Florida. He has been involved in the art of fencing since 1983 and has been coaching since 1991. Mr. Becker began his fencing career under the tutelage of Jacques Piguet, a French master and former coach o Cornell University. He continued his fencing career with Geza Kogler and Miguel D’Alerta. He moved on to become a nationally ranked fencer under Maestro Valentin Nikolov. Maestro Nikolov was a member of the Bulgarian National Sabre team and later coached the Bulgarian National Team, where a member of the team was the world champion of sabre. Mr. Becker was the head coach of Broward Community College fencing club from 1991 until 2004 when the club relocated to the City of Hallandale Beach and was called South Florida Fencing Club. The South Florida Fencing Club enjoyed many successes at that location until Mr. Becker relocated to the Phoenix, AZ area in 2007. Mr. Becker also taught fencing at Barry University from 1998 to 2007. He is currently a nationally ranked referee holding an esteemed ranking of a 1 in sabre and a 3 in epee and foil. He also holds an esteemed international referee license in both foil and sabre which was obtained in 2007. Mr. Becker is currently the Arizona Division Chair and formerly the Southeast Section Chair and Gold Coast Florida Division Chair of the United States Fencing Association. He is also a member of the USA Fencing Board of Directors and a member of the Fencing Officials Commission. He has hosted numerous divisional, sectional and national tournaments with great success.   Mr. Becker has experienced many successes during his fencing career. He is a twenty-five-time Sunshine State games gold medalist, ten-time Florida Gold Coast division champion in Men’s Sabre, four-time Florida Gold Coast Division champion in Men’s foil and two-time division champion in Men’s Epee. Mr. Becker has been a finalist in foil, sabre and epee fifteen times at the Southeast Section championships. In 2003, Mr. Becker was the Southeast Section Men’s Sabre champion and has been a four time silver medalist and three times bronze medalist in the same event. He was a U.S. National Championship finalist in 1989, 1993, 2006-2010. In 2004, he was a member and coach of the Summer National championships Men’s Sabre Silver medal team and a member of the bronze medal Men’s Epee team. Mr. Becker has over 30 National tournament medals. Mr. Becker enjoys coaching students of all ages. He has coached many students to win national medals and now has three national champions.

Coach of the year - Tim Robinson 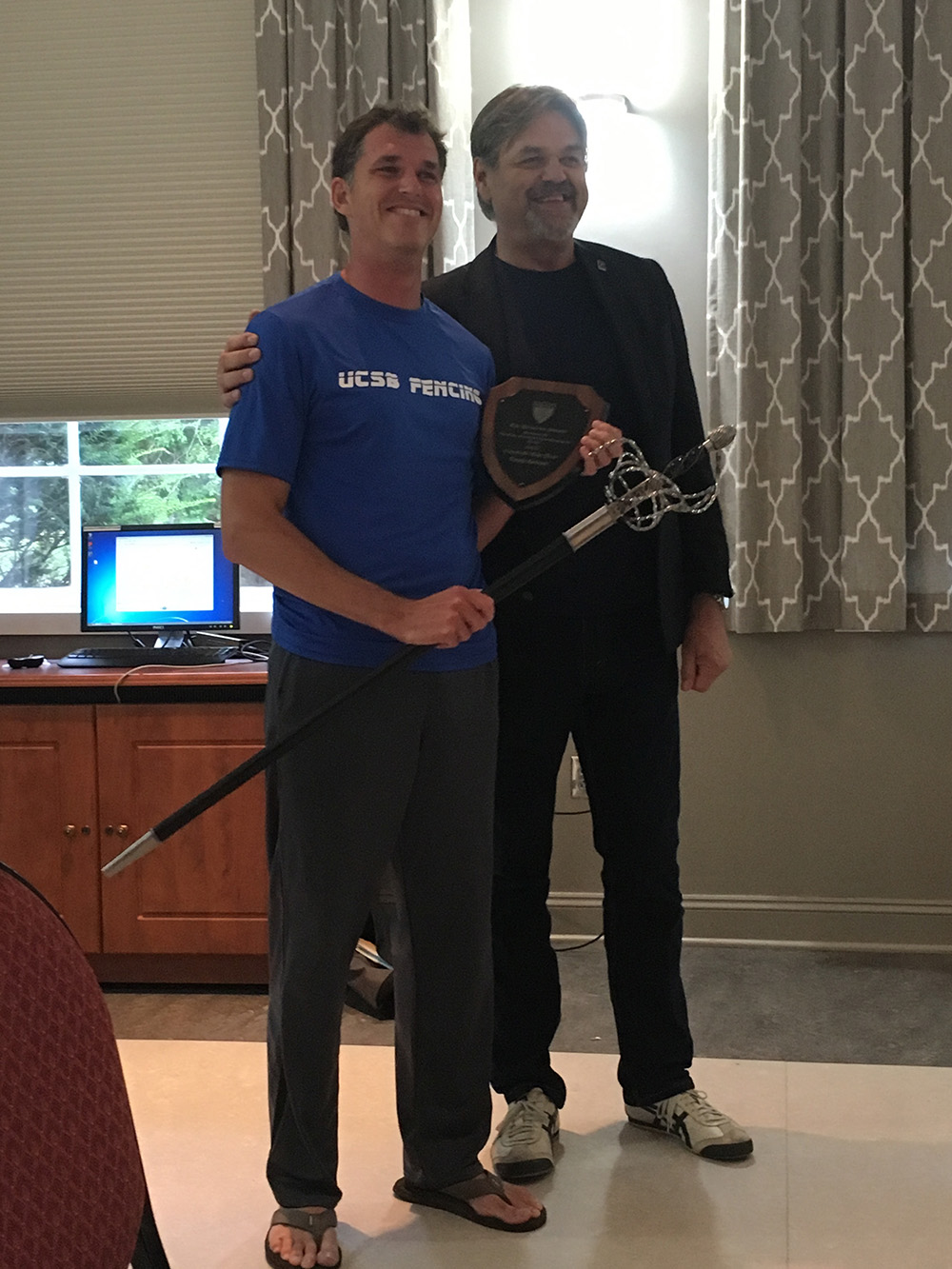 Tim Robinson holds the rank of Prevot d'Armes with the US Fencing Coaches Association (USFCA). He began coaching in 2002 as a lecturer in the Exercise and Sports Studies Department at UC Santa Barbara. Although he left this position in 2019 to focus on his appointment in the Computer Science Department, Tim still coaches the UCSB Fencing Team and Club. He is the founding coach of Presidio Fencing Club.

Coach Robinson was named USFCA Coach of the Year in 2017 for his work with the UCSB Team. His focus on the functional and athletic development of young fencers also earned him a Coach of the Year award from SBParent.com in 2008. Tim's students have reached medal rounds in various local and national tournaments since 2006. 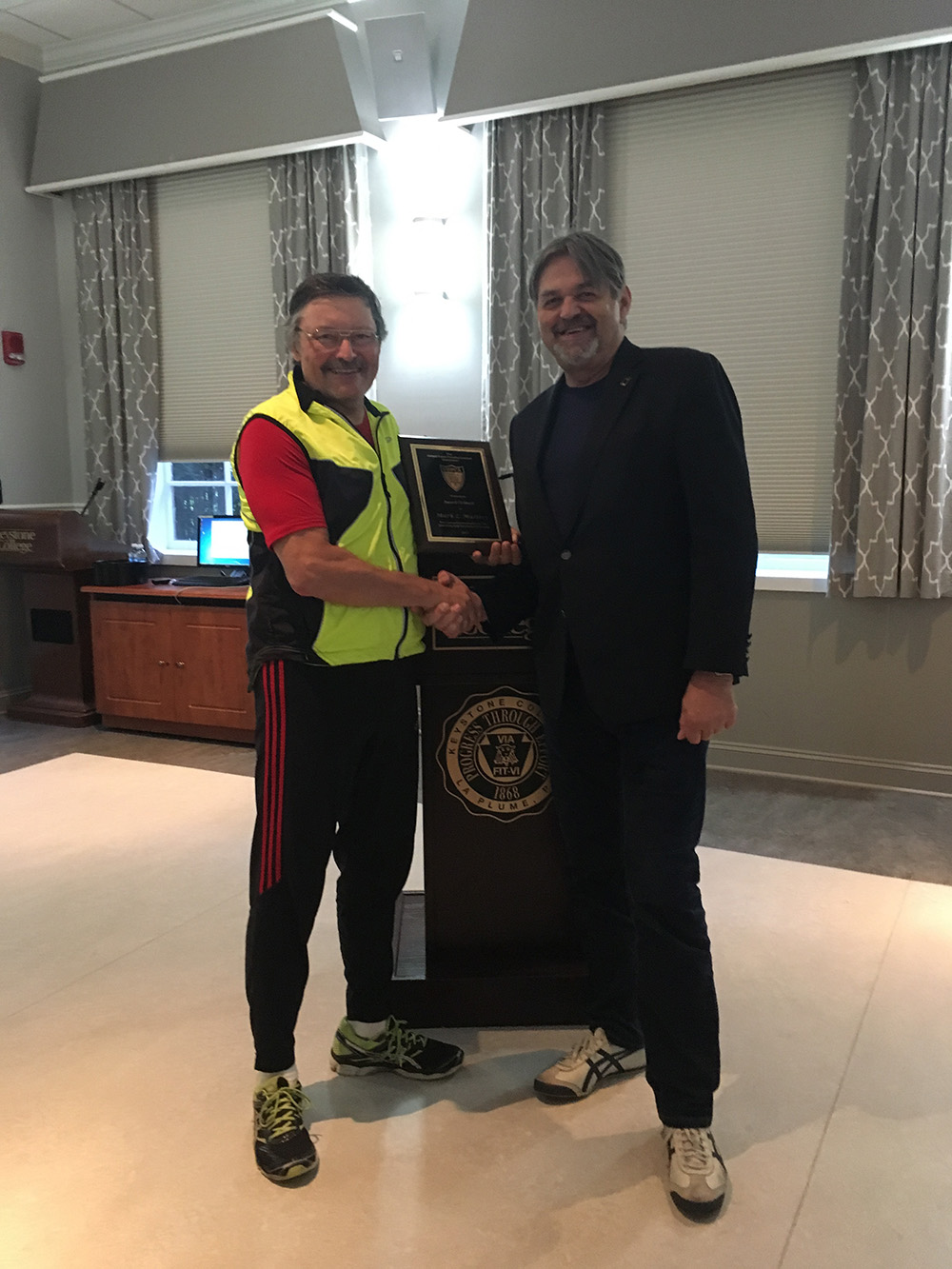 Head Fencing Master and owner of Fencing Academy of Philadelphia., Mark is a certified fitness instructor from the American College of Sports Medicine. In addition to his certifications from the US Fencing Coaches Association and the International Academy of Arms as a fencing master he holds a Master of Arts & Education degree in Recreation Programming and Management.

As a competitor Mark lived abroad and trained with some of the best European fencing masters. Although he has too many personal and coaching results to list, some of his significant results include training world champions Graham Wicas in Epee, Delia Turner in Saber and Jr. World team fencers in both genders and all weapons.

​Maestro Masters has inspired many other clubs and coaches. FAP, Inc. is the first full time professional fencing business in the US. In the Philadelphia area alone, Mark is responsible for the inspiration of Fencing Academy Main Line, Liberty Fencing Alliance, Circle dEscrime, FASJ and Delaware Valley Fencers Club. FAP is also the model for Renaissance Fencing Club in Michigan and New Amsterdam Fencing Club in New York.

Some of Mark’s accomplishments: 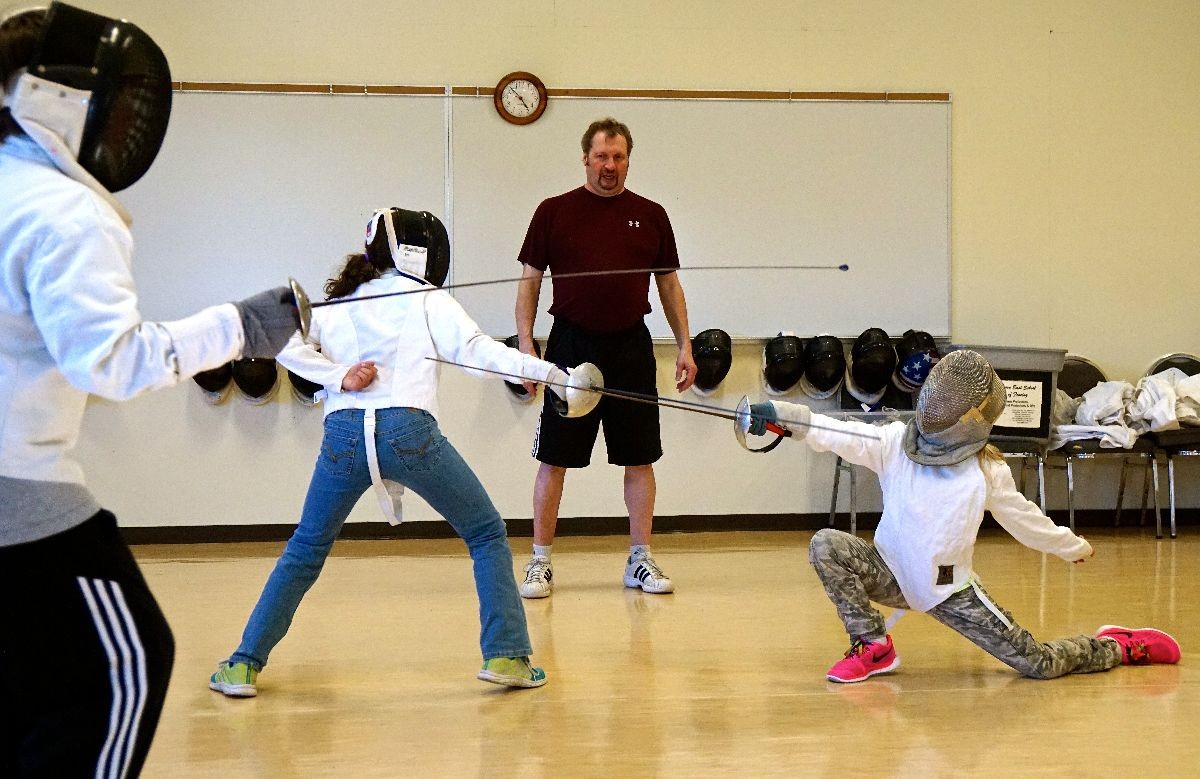 Maître John Krauss is a past Vice President of the USFCA Northeast region. He was very active in organizing the Coaches Academy for many years from 008 - 2015, including a very successful Academy in Las Vegas, Nevada. He was the creator of the USFCA Coaches Conference, the predecessor to the Coaches Academy and managed the Conference from 2008 to 2015 as the Conference Committee Chair. He is a current member of the Certification Committee.

John is very active in the State of Maine, and founded Down East School of Fencing in 2006 and continues to act as head coach and is responsible for decidedly increasing the number of fencers in that state. He has taught at many Coaching Clinics and fencing camps and began coaching in 1988.

His service over the years has been invaluable. He can be seen coaching at various National competitions, has had many nationally ranked fencers, has coached national gold medalists and world veteran finalists. He competes himself in the veteran category and has been a national finalist in Men's Foil five times. He has been fencing since 1979.

John Krauss is essentially the U.S. Fencing Coaches’ Association’s “Man in Maine”. In 2005. he was asked by newly-elected President of the USFCA Abdel Salem to take on the job of organizing the Association’s Annual Meeting and add to it a coaches’ clinic, and to feature presentations from some of the best coaches in the USA. He was so successful at the job that the Annual Meeting/clinic has been an annual and well-attended event every year since. In recognition of the great value that his work has been to the U.S.F.C.A. , he is hereby presented with the Association’s Award of Merit.

Coach of the year - Alex Ripa 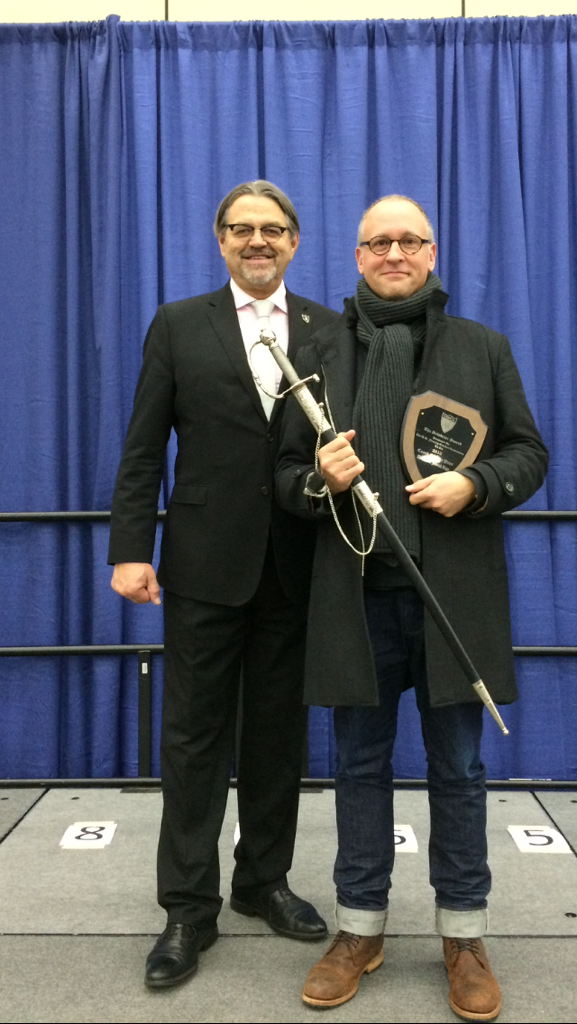 His coaching philosophy centers on athlete individuality, and he has created a remarkably successful physical and mental fencing training program that succeeds in producing champions in life, as well as in fencing.

Originally from Portsmouth, R.I., he graduated from the Massachusetts College of Art in 1995. He resides in Barrington, R.I., with his wife, Jill, and two children. 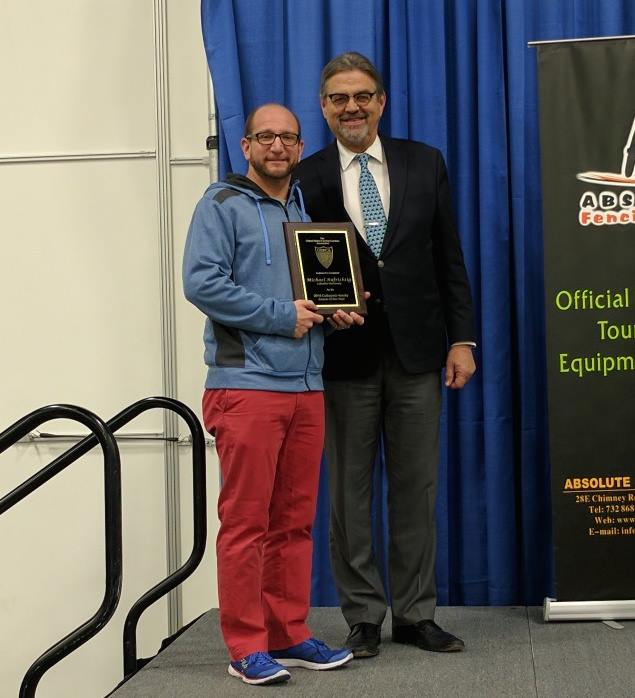 Michael Aufrichitig, Director of Fencing at Columbia University, has been named the 2016 USFCA Varsity Coach of the Year. His Columbia teams have won the last two NCAA Team Championships as well as the Ivy League title, and he has as well pioneered a new approach to scouting and recruiting collegiate fencers.

Coach Aufrichitig was a varsity epee fencer at NYU, where he graduated from the Stern School of Business in 1994. He continued to compete at a national level and joined the New York Athletic Club, where he soon was named the director of their fencing program. While serving successfully in that position the position at Columbia came open, and in 2011 he was hired to direct both the Columbia men’s varsity and the Columbia-Barnard women’s varsity. He has reinvigorated both programs and both teams’ records have improved in each year since he took over.

The USFCA recognizes and honors his accomplishment. 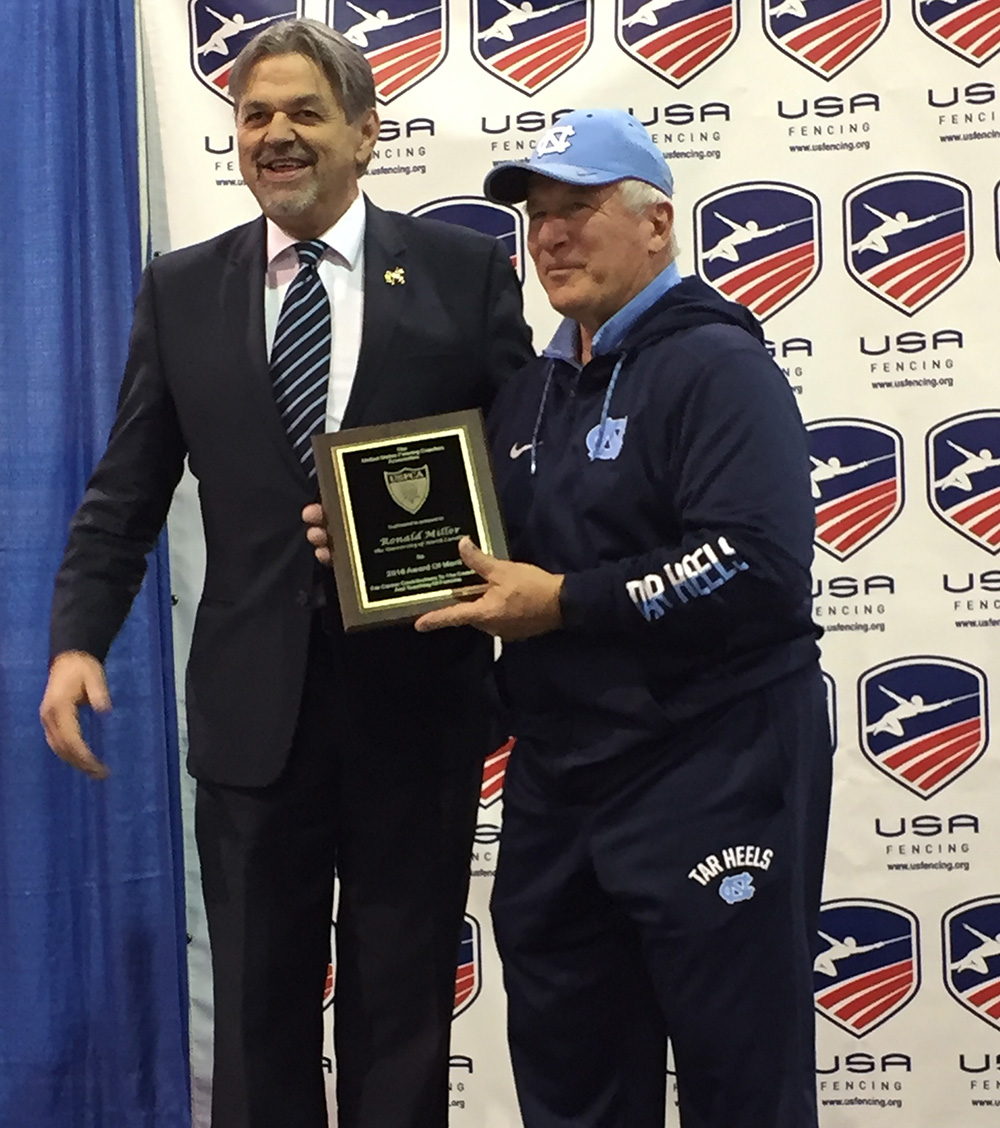 Fencing Master Ronald Miller has been the head coach of the University of North Carolina fencing team since 1967. During those years he created a consistently strong inter-collegiate program, while at the same time becoming a leader in the successful efforts to build up the sport of fencing throughout his area. He is now the longest serving coach at the University and his 2016-17 team will deliver to him his 1400th career victory.

He began fencing under Maestro Julio Castello in Florida and got an AA Degree from St.Petersburg College, then a BS in Exercise Science from Florida St. U. in 1966. He followed this with a Masters from Eastern Kentucky in ’67 and a Doctorate in 1974 from UNC. He was certified as a Fencing Master in 1980.

Coach Miller has served as a coach on both Junior & Senior USFA World teams, and also on the 1987 Pan American team. He has had two fencers on U.S. Olympic teams.

He has served as a USFCA Vice-President and as a member of the C & A Board. He has not only been a central figure in coaching circles both nation-wide and in the Southeast Region, but has been a generous mentor to aspiring coaches throughout his career. It is with great pleasure the Coaches’ Association honors his contributions to our sport % our profession. 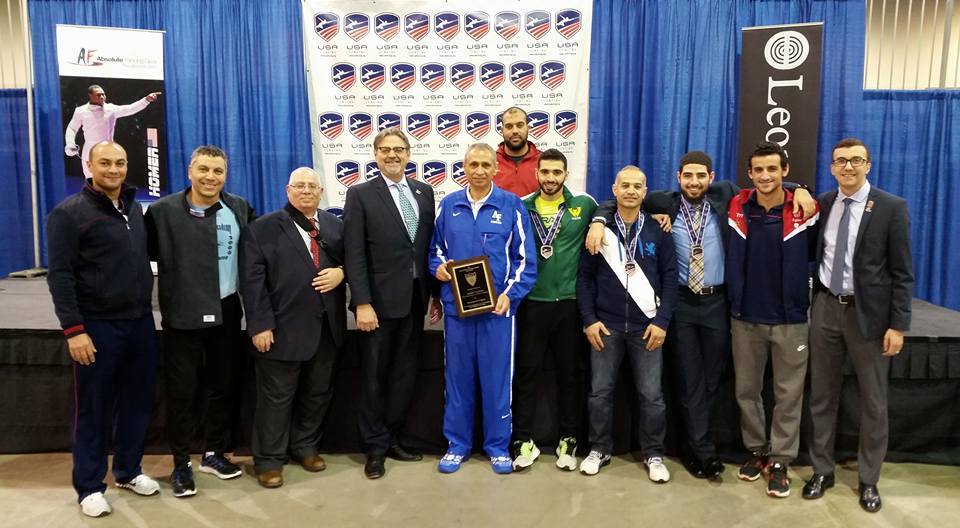 Fencing Master Abdel Salem, Head Fencing Coach at the U.S. Air Force Academy, is being honored not only for his overall career, but for his accomplishments as the President of the USFCA from 2009 to 2015. During that tenure he supervised the completion of the USFCA Coach Training Manual and Certification exams for all four levels of coach accreditation, and created the coaches’ clinic at the Annual General Meeting, which for the first time allowed candidates from across the country to come to a central location to work with experienced Masters and be tested for accreditation. This new approach has reinvigorated our Association and significantly increased our membership.

Coach Salem has been coaching in the U.S. since 1984. He is a 1980 graduate of the University of Alexandria medical school, and was a practicing physician in Egypt while he was a member of their Olympic Squad. He fenced at the 1984 Los Angeles Games representing Egypt, but then remained here and began coaching at the Westside Fencing Center. It was there that he trained the team that would eventually win the USFA National Foil Team Championship. He was Ass’t Fencing Coach at the University of Pennsylvania from 1986 to ’89,  then became the Head Coach at the Lone Star Fencing Academy in Dallas.  For the next 7 years he developed several nationally-ranked fencers before being tapped by the Academy in 1997 to head the USAFA program.

He are recognizing him for his successful career in coaching, of course, but we particularly mean to honor his time as our President. 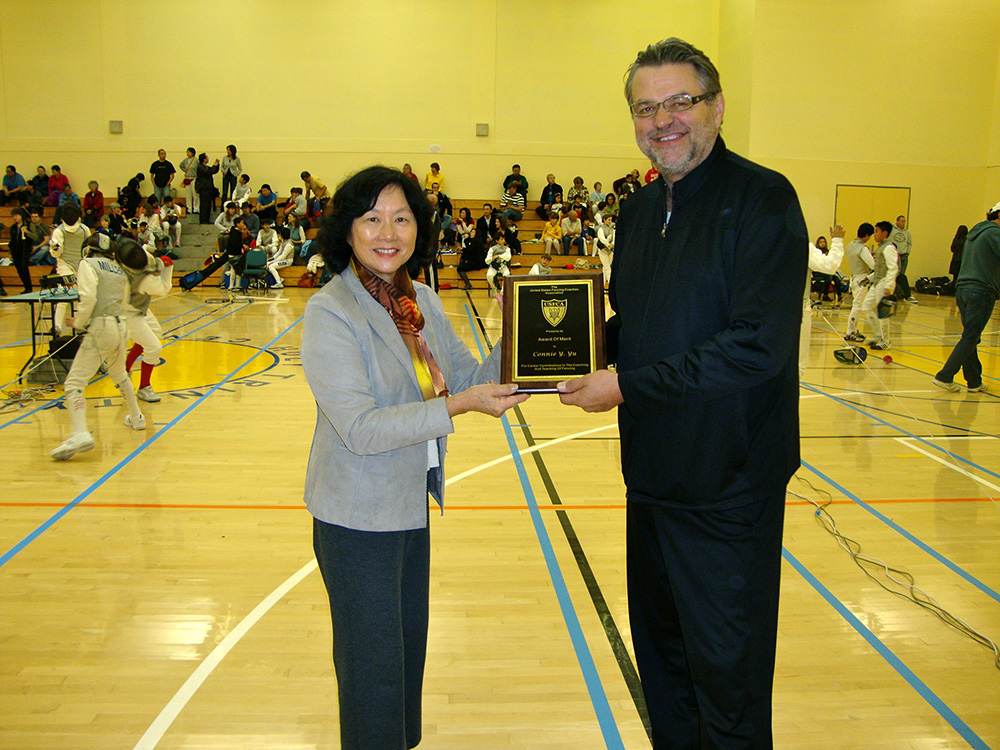 A founding member of The Fencing Center’s first board of directors, Connie Yu, selected as the USFA Western Region Developmental coach of the year in 2000, has over 16 years of competitive fencing experience and is a certified Moniteur D’Escrime in foil and epee by the USFCA (United States Fencing Coaches Association). In 2010 Connie was awarded The USFCA Award of Merit for contributions to the promotion and teaching the art of fencing. Connie, mother of Jennifer (1990 National Foil Champion & World Championship team member), Jessica (Oscar Winner and Multiple World Championship team member) and Marty (Multiple World Championship team member) brings a long history of excellence to youth, junior, and adult development at TFC including several finalists at Junior Olympics and national circuit events. Connie has organized, managed, and coached annual Junior fencing camps since 1988. Since 2001 Connie has organized and coached TFC’s ‘Camp Winabout’ for youth and juniors and was the teacher of Youth Fencing classes at the Palo Alto J.C.C. 1986-2007. Additionally, 2 of her students were among the top 10 youth fencers being considered for the 1998 Moscow Youth World Championship team. Connie is CA State, and USA Nationally Live Scan certified.